Alexithymia is a complex, subclinical phenomenon characterized by cognitive-affective functioning impairments that can affect as many as 10% of the general population. Typically, individuals with alexithymia struggle to recognize, identify and describe their feelings. This often includes trouble discerning between emotions and physiological sensations. Because alexithymia is a known risk factor for a wide range of psychological and physical health problems, this psychological construct has significant implications for professionals working in the field of mental health. In fact, the failure to accurately identify the presence of alexithymia can significantly impact the intake, screening, goal-planning and therapeutic processes. Therefore, mental health professionals should become familiar with the wide array of disorders, traits and experiences often associated with elevated rates of alexithymia.

Unfortunately, many mental health professionals lack the necessary training and expertise to accurately identify and effectively treat the unique and complex symptoms of alexithymia. A strong contributor to this predicament is the lack of training and educational programs that offer workshops and coursework dedicated to this important and complex topic. The goal of this article is to provide mental health professionals with a basic introduction to alexithymia by highlighting information in four essential areas: (a) symptoms and red-flag indicators, (b) diagnostic comorbidity, (c) screening and assessment and (d) intervention and treatment considerations.

Symptoms of alexithymia can vary from person to person and are often influenced by many neurological, biological and psychosocial factors.

The cognitive factors associated with alexithymia can include:

Alexithymia often co-occurs with a diverse array of psychiatric, trauma-based, neurocognitive, neurodevelopmental and substance use disorders, so it is likely that mental health professionals provide services to clients impacted by alexithymia on a regular basis. In particular, individuals with alexithymia are quite prone, but not limited, to presenting with another disorder that features affective symptoms. It is important to note that alexithymia can be viewed as a risk factor for psychopathology as well as other conditions. The following highlights some mental health conditions often associated with alexithymia.

Substance use and other addictive disorders. The prevalence rates of alexithymia are higher among individuals with substance use and addictive problems than the general population. In addition, individuals with alexithymia appear to be at risk for more severe alcohol-related problems than those without alexithymia. This has led some researchers to posit that alexithymia could place a person at risk for alcohol use problems. Failure to consider the role of alexithymia in alcohol use could undermine the effectiveness of any interventions.

Stress-related disorders. Research has consistently linked alexithymia to physiological stress markers as well as stress-related disorders. For instance, individuals with alexithymia often exhibit elevated levels of chronic stress on measures of cortisol awakening response and cortisol secretion during the dexamethasone suppression test. Other evidence includes increases in inflammation and atypical immune responses, which could be consequences of prolonged exposure to stress.

Posttraumatic stress disorder. Posttraumatic stress disorder (PTSD) is a condition characterized by heightened reactions, anxiety, intrusive memories and nightmares, and other-related symptoms. The onset of PTSD is precipitated by exposure to a traumatic event (e.g., violence, accidents, natural disasters). Some of the same traumatic experiences that lead to PTSD could also contribute to the development of alexithymia. As a result, mental health professionals are encouraged to screen for alexithymia in clients presenting with PTSD.

Hypothalamic-pituitary-adrenal axis dysfunction. The hypothalamic-pituitary-adrenal (HPA) axis may play a role in alexithymia. This system is responsible for regulating stress responses and ensuring the body adjusts to evolving environmental conditions. Exposure to stressful situations can elicit chronic hyperactivity of the HPA axis. In such instances, a person becomes at risk for stress-related physical and mental health problems. Because of the potential connection, I recommend counselors also become informed about the HPA axis when learning about alexithymia.

Somatic symptoms. Individuals with alexithymia tend to score higher on measures of physical distress than the general population. These physiological differences could help explain the higher prevalence of anxiety and depression symptoms among those with alexithymia. During times of distress, people with alexithymia may experience and complain more about psychosomatic-based symptoms.

Dissociative tendencies. Dissociation occurs when there is a disconnection among a person’s cognitions, emotions and actions. The presence of dissociation could play a role in the emergence of alexithymia or vice versa. This is particularly salient in people who have experienced trauma such as neglect and abuse. In such cases, the development of dissociation and alexithymia could serve as an adaptive response that prevents a person from being overwhelmed.

Sleep disturbances. Individuals with alexithymia often report comorbid sleep problems. These can include difficulties with staying awake or falling and staying asleep. Emotional problems that are similar to alexithymia have also been observed among individuals experiencing sleep deprivation.

Emotional regulation deficits. Individuals with alexithymia often present with emotional dysregulation issues. For example, individuals with alexithymia usually struggle to express or understand their feelings and the feelings of others. As a result, many mistake the symptoms of alexithymia as a lack of empathy. Consequences of emotional dysregulation include difficulties with establishing and maintaining relationships across the life span. In some instances, this could lead to a breakdown in the therapeutic alliance.

Worry and rumination. Individuals with alexithymia typically experience high levels of worry and rumination. Worry is generally distinguished by fears of danger, whereas rumination is characterized by thoughts about loss and failure. These repetitive cognitive processes are common in internalizing disorders (e.g., anxiety, depression).

Clinicians should carefully screen for alexithymia prior to the development of mental health and substance use treatment plans. The Toronto Alexithymia Scale (TAS-20) is one instrument counselors can use to screen for alexithymia. The TAS-20, which is commonly used in neuroscience studies, is a 20-item, self-report questionnaire that measures skills in the areas of emotion recognition, emotion description and perspective-taking. Several empirically based articles have been published pertaining to the efficacy of the TAS-20.

When screening, clinicians should watch for increased symptom reporting. Individuals with alexithymia are prone to confusing emotions and feelings for physiological problems with their bodies. In turn, this group is disproportionately likely to overreport and seek medical care for physiological problems. This is another example of maladaptive coping in the context of alexithymia. 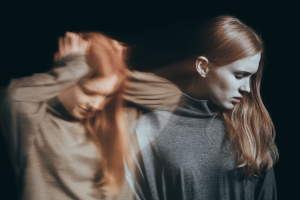 As mentioned in the previous section, individuals with elevated stress and anxiety, burnout, or a history of trauma are predisposed to alexithymia. Therefore, systematic screening and assessment for alexithymia is encouraged in these groups. Trauma-informed counselors would also benefit from learning about alexithymia.

Emotional numbing and emotional suppression are two other areas that mental health providers should consider during the intake and treatment planning process. Emotional numbing is the affective process of minimizing or eliminating the experience of feelings. Like alexithymia, this could be viewed as a temporary coping strategy that is deployed to protect against the consequences of trauma. And emotional suppression is a common way that individuals with alexithymia regulate their feelings. This may be traced back to difficulties in recognizing and understanding emotions that characterize alexithymia.

It is also critical that mental health professionals obtain information from collateral informants when screening for alexithymia. In many instances, the client may lack insight into their own symptoms, which renders self-reported information as insufficient. So conferring with family members, friends and co-workers can help illuminate the nature of the client’s symptoms and their impact on global functioning. In addition, consulting with any other professionals that work with the client can be informative.

The symptoms of alexithymia likely undermine the development of therapeutic alliances with mental health professionals. Specifically, difficulties with recognizing and describing affective experiences as well as perspective-taking make it difficult to develop interpersonal closeness with others.

The difficulties that alexithymia presents in terms of the therapeutic alliance and treatment engagement are particularly salient in substance use treatment settings. Clients with alexithymia may be dependent on the use of substances to cope with the affective symptoms of their condition. The failure to account for and address alexithymia during the therapeutic process decreases the likelihood of good treatment prognosis.

The research literature on the treatment of alexithymia has grown in recent decades, and there is now a substantive list of interventions worth considering when treating clients with alexithymia (see table below). Psychoeducation offers one promising treatment option for clients with alexithymia. A limited but growing body of research indicates that supportive and psychoeducational approaches to therapy may be effective in treating alexithymia. Interpretive approaches to therapy, however, appear to be less effective with this population.

Alexithymia is a complex and important topic all mental health clinicians need to know. Since elevated rates of alexithymia are found in a host of trauma-based, substance use, neuropsychiatric, neurocognitive and neurodevelopmental disorders, it is likely that mental health professionals will encounter clients impacted by this subclinical, cognitive-affective deficit on a regular basis. Unfortunately, in my experience, few professionals working in the field of mental health have received sufficient education and training pertaining to the topic of alexithymia.

I strongly encourage all helping professionals to become informed about alexithymia. Here are three ways counselors can begin this process:

Here are some important reminders mental health professionals need to consider when learning about the topic of alexithymia:

Jerrod Brown is an associate professor, program director and lead developer for the master’s degree in human services with an emphasis in forensic behavioral health and in trauma, resilience and self-care strategies for Concordia University in St. Paul, Minnesota. He has also been employed with Pathways Counseling Center in St. Paul for the past 19 years. Contact him at Jerrod01234Brown@live.com.