Fan communities, or fandoms, are often misunderstood by the public. Fandoms refers to people who share a common interest in an aspect of popular culture. Whether they are huge fans of the Marvel Cinematic Universe or enjoy dressing as anthropomorphic animal characters, also known as “furries,” people who dedicate their free time to a specific piece of media are often seen as “odd” or childish to others.

For example, according to a 2017 article published in Psychology Today, some people consider furries’ desire to dress as animals as a form of sexual gratification, rather than a form of self-expression. In the case of fans of fictional franchises, such as the British science-fiction TV series Doctor Who, the negativity seems to come from a long-established idea that these fans are social misfits and outcasts and that they place more importance on their fictional world rather than reality.

Being a fan of a certain sport or sports team, however, is seen as more socially acceptable and often isn’t considered to be a “fandom” in the same way pop culture fiction is. But even as science fiction, fantasy and superhero franchises become more mainstream in pop culture, those who are deeply enmeshed in fandom culture may still feel as though their passions won’t be properly understood by mental health professionals because of these stigmas.

“Speaking as a science fiction geek myself — I even have a Star Trek tattoo — this subject is really close to my heart. Empathy is important when supporting any therapy client, but because there can be some stigma around fandom communities, empathy is important when supporting fandom clients. If the therapist is coming from a perspective that perpetuates stigma, such as looking down on furry cosplay artists or fanfiction authors, it’s important for the therapist to do the inner work, to grow as a person, to learn how to see the joy in others’ joy,” says Lindsay Meagher, a licensed mental health counselor at Protea Wellness in Seattle. “It’s important to internally approach fandom clients from an open-hearted, open-minded, empathic perspective.”

Geek therapy operates on the principle of affinity, which is using common interests or background to establish a repertoire with a client. If a counselor mentions they share an interest in a particular piece of media or a love of going to fan conventions, the client can feel more comfortable expressing this part of their identity.

Ashley Myhre, a licensed marriage and family therapist at POW! Psychotherapy in Minneapolis, says it’s important for clinicians who are working with this population to create spaces where the clients can feel safe to express themselves.

Myhre has created her practice around the idea of fandom therapy. The logo for her private practice resembles a sound-effect bubble from comic books: It’s a light blue bubble with the word “pow” written in orange, capital letters. She says this design choice helps communicate that her practice is one where clients can bring their whole self to sessions.

“If that’s the kind of client you want to cater to, you need to make your space welcoming,” she explains. Her office space is decorated with rainbow flags, pop culture figurines and stuffed animals, which are images that signal to her clients that her practice is a safe space for people in LGBTQ+ and fandom communities. Her website also contains a statement saying, “Mental health for nerds, geeks, misfits and others outside of the mainstream.”

Counselors who aren’t a part of fan communities can still show their support in small ways, Myhre notes. For instance, she says that little things such as office decorations can make or break a client’s trust. “Do you have any kind of fan art in your spaces? Is your mug from your favorite TV show? What are [some] visual cues you can be sending to clients that it’s a safe space?” she asks.

Counselors can also find ways to learn about fandom and use this knowledge to build rapport with clients. It’s much easier to make your space welcoming to those in fandoms when you understand the basics, Myhre says. And part of that can be done simply by listening to and respecting clients’ passions.

Myhre advises counselors to listen for cues where the client is talking super passionately about some aspect of fandom such as a particular character or object. When she hears this, she will ask the client questions such as “How has this mirrored some of your own experiences?” “How have you come to better understand yourself through being a fan of this media?” “What are the strengths you see in these characters that you want to bring into your own life?” or “How does this align with your values?”

Doc Davis, a licensed professional counselor and owner of Side Quest Therapy in Austin, Texas, takes this a step further by incorporating games, such as video games or online chess, into counseling sessions. This is the approach he takes with one of his clients; he always begins their virtual counseling session by playing a video game together.

“We start our sessions literally online together playing a game,” Davis explains. “We’re not talking about therapy just yet; we’re just playing a game, … having fun, and then the therapy starts to slip in.” When the conversation starts to be less about the game and starts becoming more about the client’s life, Davis puts the game on pause, and they continue the conversation and move into the therapeutic part of the session. 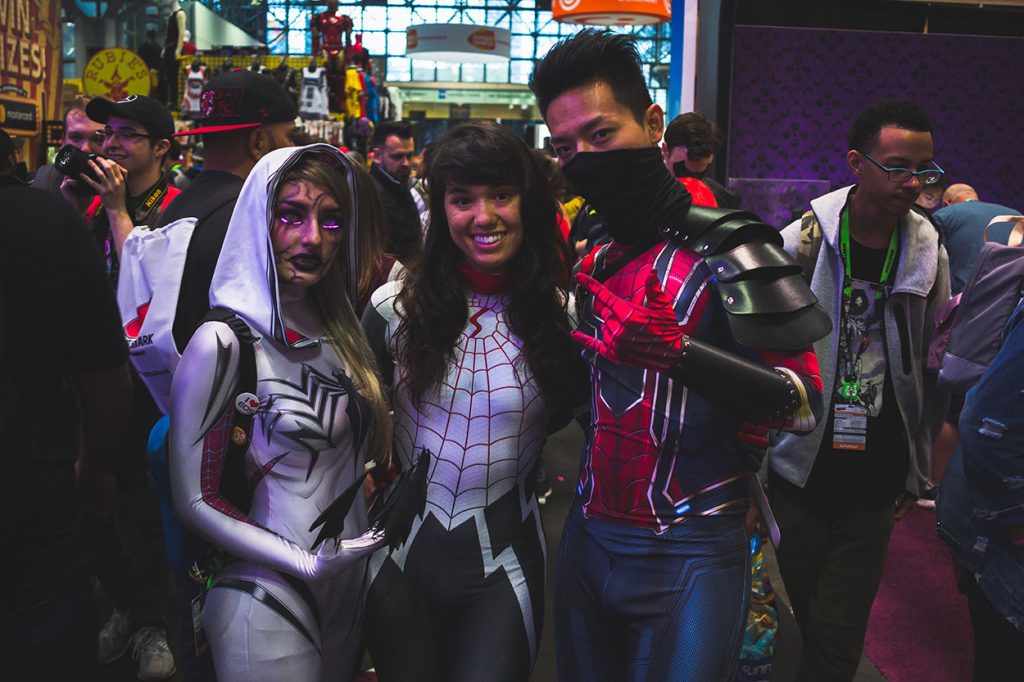 Finding a sense of community

Fandom can also provide a sense of community. Those who struggle to connect with others in real-life communities may find their companions online or in person through a shared love of a piece of media. For people who struggle to make friends, outwardly expressing their fandom makes for an easy icebreaker. Two people wearing the same shirt, for example, can strike up a conversation and form a friendship based on their mutual interest.

Meagher says that while anybody can potentially be drawn to fandom cultures, people on the autism spectrum are often drawn to fandoms. “A lot of fandoms and a lot of passions are autistic special interests,” says Meagher, who is autistic. “Many of us in the autistic community lean into our passions in really beautiful ways that are part of the community’s norms, but that can be jarring for a lot of people outside of the autistic community who maybe don’t engage with the world in that way.”

People in fandom often use social media platforms to connect with each other. Both Facebook and Reddit allow people to join different groups devoted to fandoms, and there are several hashtags that make it easy to find people who share similar fandom interests.

“I know that social media has helped people who are isolated, often as a result of physical disabilities like fibromyalgia, or as a result of being in grad school. … Often people in fandoms are seeking friendship with people that they have something in common with, and it can be a little hard sometimes to make local friends quickly who share in one’s passions, so this makes online social spaces, such as Archive of Our Own, Discord, Instagram, Tumblr, and even Facebook and Twitter, really lifesaving for a lot of us,” Meagher says.

People involved in fandom often consider themselves to be their own community — one with a shared interest. So having a therapist who is also familiar with the concept and importance of fandoms will make a client more comfortable in the therapeutic environment.

“I think if you’re in fandom, you get it. We have this shared experience. … It just makes things so much easier,” Myhre says.

Just knowing that fandoms are valid communities and becoming curious about a client’s passion is a good start and helps counselors connect with this population. Counselors can also consider where their own “geeky” interests lie and make those interests known to their clients, Myhre adds.

Davis agrees that counselors should be open to exploring aspects of fandom that interest them. The name of his private practice, Side Quest Therapy, is a reference that is instantly recognizable to people who play video or tabletop games. It shows that he’s more than a therapist who just happens to play games, he says. It shows that he integrates it into his clinical work.

Counselors, of course, can’t be a fan of everything, so they will encounter clients with different interests. When Myhre has a client who has an interest she isn’t familiar with — such as a particular anime — she’ll watch a few episodes so she can learn a little bit about it and be able to connect better with the client. For example, she may ask, “What are you getting from anime? Is this particular story connecting with you? Are you bringing some of the lessons into your own life?”

Myhre, Davis and Meagher agree that the most important thing is for counselors to be themselves.

If counselors do not specialize in geek therapy or do not find that it fits well with their clinical approach, then they should refer clients to someone who does have knowledge working with this population, Davis says. If a counselor’s first reaction to somebody whose main hobby is cosplay is “What is that?” then it might not be a good match. But counselors who aren’t into fandom, Davis adds, can still put in the work and educate themselves on what fandom means to their clients.

However, in general, a client whose identity is centered on fandoms often works better with a counselor who also has a passion for them. “Can you imagine what it would be like to go to your therapist and [have] them express to you from that same place because they have that same love, same passion and you can recognize them?” Davis says. “If you don’t have knowledge of fandoms, you could seriously consider creating a referral list for people like me who will look at that and be like, ‘Cool, let’s make that happen.’”

As with any kind of relationship, a parasocial relationship can become toxic, but they can also be beneficial. People who are isolated in their real life may find community and friendship online with their peers and with fictional characters, says Lindsay Meagher, a licensed mental health counselor at Protea Wellness in Seattle. Having parasocial relationships can be a way to make real friendships with people online and/or in person by bonding over a shared love of fandoms, they explain.

Myhre sometimes incorporates the parasocial relationships in session. She may ask a client to imagine what the person or character they are in a parasocial relationship with would say to encourage them when they’re in a depressive state, or she may ask the client to find a positive attribute they share with this person/character. If a client’s favorite character is physically fit, for example, then that client may be more inspired to make healthier lifestyle changes because they want to emulate the character or because seeing this character’s lifestyle motivated them to make changes they were already wanting to make in their lives. In addition, seeing a fictional character go to counseling or talk about their mental health can help destigmatize the idea for potential clients.

But at the end of the day, parasocial relationships with fictional entities often come down to people seeing similarities in experiences that are like their own. Someone who is neurodivergent, for example, may not feel accepted in their real-life social circles, so having a parasocial relationship with a fictional character or celebrity who is also neurodivergent can help them figure out their own identity and accept their differences.

Samantha Cooper is a staff writer for Counseling Today. Contact her at scooper@counseling.org.