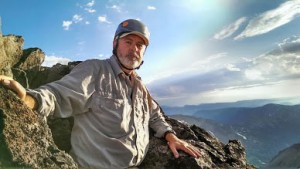 There is a saying often repeated among people who skydive, bungee jump, white water raft or take part in other adventure sports: “We take risk not to escape life but to keep life from escaping.”

This phrase that encapsulates the adventure sports subculture also shines a light on the disconnect that can occur between counselors and their clients who participate in adventure sports, says Colin Ward, a practicing counselor, counselor educator and mountaineer.

From the outside looking in, adventure sports participants can seem foolhardy, Ward acknowledges. But there is often a strong camaraderie and trust between participants, as well as a deep sense of self-awareness, he says.

“It just looks as if these folks are impulsive, and [people] ask, ‘How can they do that?’” Ward says. “You and your client who is involved in these activities are going to think about risk differently. You just are.”

Adventure sports are defined as activities in which there is a high risk of severe injury or death to participants should something go wrong. Examples include high altitude skiing, bungee jumping, white water rafting or kayaking, skydiving and mountain climbing.

Ward, a core faculty member at Antioch University, started a Seattle-area mental health support network for adventure sports participants roughly two years ago. A practicing counselor for nearly 30 years, he began to focus on the profession’s connection to adventure sports when he took up mountaineering.

Ward and Erin Wenzel, a licensed skydiver and student in Ward’s graduate counseling program at Antioch, have been working on outreach to fellow adventure sports enthusiasts, as well as to counselors, developing ideas about how mental health professionals can “check their bias at the door,” Ward says.

When Ward talks about counselors engaging with people who participate in activities “with a high level of risk,” he emphasizes that he is not referring to adventure-based counseling, which is something entirely different.

Wenzel clarifies further, noting that adventure sports participants may need counseling as they return to their sport after a traumatic injury or accident, or as they grieve the death of a fellow participant or teammate during an outing.

“Adventure sports participants need counselors who are understanding, nonjudgmental, solution-focused, open to handling ambiguity and willing to check their own countertransference about life-threatening recreational activities,” Wenzel says. “We cannot stigmatize these clients as ‘crazy,’ ‘selfish’ or ‘reckless.’ Not only will we miss what committed, passionate, goal-oriented people they tend to be, but we will deny them access to a safe healing space, because once we make them unwelcome in counseling, they will likely never come back.”

Ward contends that a “gap of perception” exists between adventure sports participants and the mental health community.

“[Adventure sports participants] tend to be a bit more autonomous, and reaching out for [mental health] services may not even cross their minds,” he says.

Contrary to what may commonly be believed, adventure sports participants are anything but impulsive, Ward says. In fact, he finds them to be quite the opposite. Most have an orientation toward personal mastery, self-control and goal setting, he says. In addition, they test themselves by adding risk gradually. Ward knows this firsthand; he trained for a full year before going on his first climb. He also points out that they demonstrate a deep level of trust in and reliance on their teammates, who are often on the other end of their climbing ropes or alongside them in a kayak.

These clients will know if a counselor doesn’t “get” the adventure sports culture or stereotypes its participants as impulsive adrenaline junkies, Ward says. “[They] will pick that up in a heartbeat, that ‘this is someone who doesn’t understand my experience,’” he says.

Ward and Wenzel agree that the popularity of adventure sports is growing. For that reason, counselors of all specialties may see participants, Wenzel says. For example, a marriage and family counselor might see a couple struggling with one spouse’s love for a sport — and the risk, time commitment and expense that goes with it.

“It behooves mental health professionals to acknowledge that there are distinct approaches and styles to deal with this population,” Ward says. “This is another way we can provide outreach [and] provide a service to our community.”

After a few tandem jumps, graduate counseling student Erin Wenzel became a licensed skydiver in 2010. She broke her ankle that same year.

“I was everything you might expect an injured adventure sports participant to be: disappointed, frustrated, embarrassed, guilt-ridden and fearful,” she says. “I was suddenly dependent upon people who never really liked the idea of my jumping to help me with basic things, was having nightmares about crashing into the ground and snapping my neck, and had to leave my co-workers hanging while I took time off of work.

“On top of that, I felt like no one really understood what I was going through or what I needed from them. Other skydivers, though very well-intentioned — some of whom had been injured themselves — just naturally assumed I would jump again. My family assumed that I was quitting. I wanted someone to be a neutral, supportive third party and just listen and help me make up my own mind, and I didn’t really have that.

“Why do people skydive?” A first-person blog by skydiver Lori Steffen: nolimitsskydiving.com/skydives/why-do-people-skydive/

Personal essay, “Why I Climb” alanarnette.com/stories/whyiclimb.php